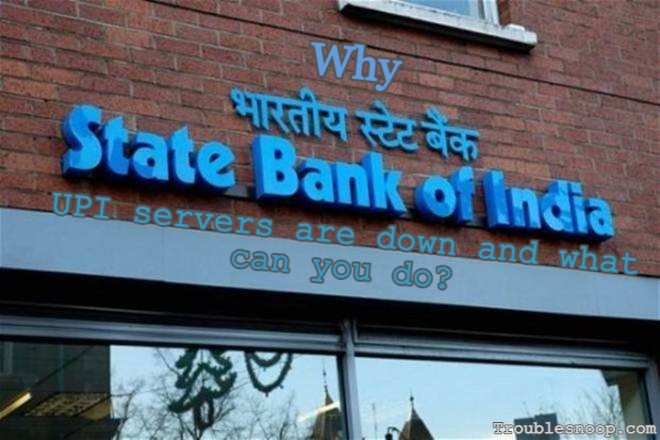 The State bank of India has many more transaction failures from their UPI ID’s. Why SBI UPI servers are down and what can you do? To know what is the problem SBI bank has in it. Stay tuned with us.

Sbi bank transactions failed nowadays because SBI servers are down for some period of time. Many customers of State Bank of India take this problem on social media on Tuesday to complain about SBI technical errors to transaction failures.

When SBI users want to send money from one person to another with the help of UPI(Google Pay, PhonePe, Paytm) then they will get “Servers temporarily unavailable” or “Your bank’s servers didn’t respond” on there mobile screen.

All users of SBI getting the same problem when they are doing anything related to their profile like balance check, make payment and update profile.

Some of the users know they are unable to send money from UPI Id’s but they carried out payment at their own risk but the transaction is not get reflected at their end nor the end of the receiver. Due to this lot of users are frustrated in this starting week.

Why SBI UPI servers are down and what can you do?

Here below some of the users posted on Twitter :

@GooglePayIndia is there any issue with the registration of account of SBI on google pay??

I’m unable to access my account balance data from the Google pay app, and unable to do transactions. What’s the problem with the SBI server? when everything will be normal?

Dear @PhonePe_ I have trying to use SBI UPI but somehow for 2 days multiple times the transaction are getting unsuccessful. The same issue is faced by many friends who have SBI UPI are also facing the issue.

After receiving these comments from users SBI stated that there are intermitted connectivity issues with their UPI app and the team is working on this issue.

Check out below SBI Response on above reception on Twitter :

Dear Customer, We regret the inconvenience caused. There are intermittent connectivity issues with our UPI app. Our team is on the job to resolve it at the earliest. We suggest you use our other digital channels.

SBI does not clear how much time it will take to resolve this problem, They suggested all of the users try other digital payment methods like net banking.

What can you do when SBI UPI Servers are down?

Many users kept in their mind that UPI servers give limited access at night hours. Many users would have experienced that at night time they are not able to send money or do their transactions. It is a myth, It all depends on bank infrastructure, how native banks CBS talks to NPCI switch or servers or we can say how one server can communicate with another server at night time.

Many banks keep their CBS database offline at night time which leads to the failure of UPI transaction through NCPI usually its UPI servers and switch is active with 24*7 hours basis.

If you want to send money from HDFC bank at night from the SBI UPI app. In this example, the transaction is completed successfully. These three payment service is linked with each other or we can say they are Synched with each other.

RBI is now currently checking why the SBI UPI Servers are down. The steps were taken just after it had gone down on HDFC bank for having multiple outages according to reports.