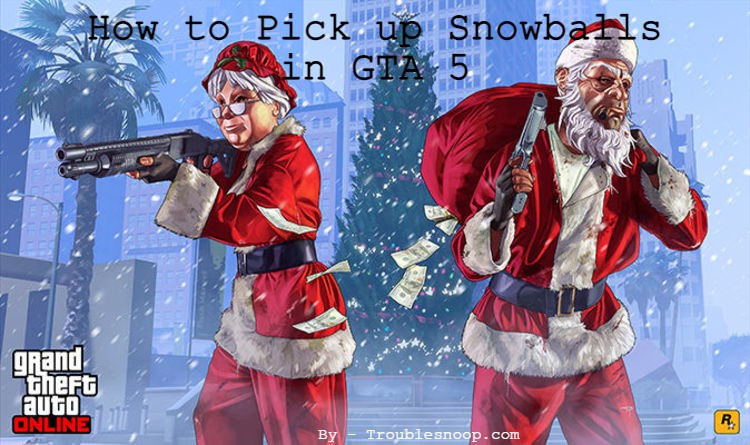 Every year it’s snowing in Los Santos for the last seven days of Dec. If you are playing a GTA game then you can actually shoot snowball for fun. Here we will tell you how to pick up snowballs in GTA 5.

This Snowfall update is a new update to the game where the whole city is celebrating Christmas in snow. Many Players don’t know how to play with SnowBall and pick up snow.

The Snow version of the game is very impressive to game players. Players want to enjoy this snow version for a long time but Rockstar Games only activities this version is only for Sevens days or limited time.

You can throw snowballs and it doesn’t matter which platform you are playing on, PS4, Xbox One, or PC, you can pick up Snowballs on any device.

How to Pick up Snowballs in GTA 5?

Before starting a fight with your friends you should know how to pick up the snowball. Controls are very different from the keys which we are using for our gameplay.

How to Pick Up SnowBalls in GTA 5 ?

So now you have picked up a Snowball, you should now know that How to throw Snowball in GTA 5 on PS4, Xbox One, and PC.

You should make note of one thing you are not able to pick up snow where snow doesn’t fall naturally. Also, you can throw snowballs to Cops or NPC’s it won’t result in any starts.

How to Throw SnowBalls in GTA 5?

Now you have snowballs with you it is very important to throw them to win the battle with your rival. To throw snowballs Select Them on your Weapon Wheel.

After Selecting the Snowballs, Simply Press the aim and fire buttons that you normally would for any other weapon. We can store 9 snowballs with us.

The process of picking up and throwing snowballs is the same for all Machines. First, you need to be Unarmed and stand on a snow-covered surface. Press the Left arrow on the D-pad and you will pick up a snowball. To throw select snowballs from your weapon wheel to throw them as we shoot through the gun.

Note – To Play with snow you should be unarmed. Also, you can pick up snow if you are playing in Online mode. If you have any other tricks to pick up snowballs then put them into the comment section.